When it comes to planning the party programmes, we have three criteria: they must be educational, fun and engaging. Ever since Dana started attending the weekly Science enrichment in her kindy, she’s take a great liking to Science. She devours the Young Scientist Magazines avidly and dabbles in the occasional home experiments as ‘Scientist Dana and Singlet Daddy’. When Mad Science Singapore wanted to sponsor Dana with a Mad Science programme, we knew it couldn’t be more than perfect for Dana’s 6th Birthday Party.

Mad Science Singapore‘s innovative programs help kids learn about science through hands-on, fun after-school programmes, preschool programmes, in-class workshops, camps and birthday parties. They have multiple themes for parents to choose and we picked ‘Young Wizards’ right away as it fits our ‘Frozen’ party theme and we know it would enchant the children just like the movie. After all, Princess Elsa did possess magical powers, didn’t she?

During the one hour programme, Dana and her little friends were led into the world of wizardry and tried their hand at concocting Spells and Potions, each time, with the Mad Scientist revealing the science behind them!

Here are some highlights at the ‘Young Wizards’ party:

The birthday girl and her friends helped the Mad Scientist brew Mystic Rainbow Potions with many mystical ‘Harry Potterish’ ingredients such as Ice from the Mystic Cave of Yaaaaaaar, Hen’s Bile, Yolk of Dragons Egg, Pure Water from the River Tigris and Euphrates, Rat’s Tooth Powder and more!  This is a unique hands on and fun experiment which intrigued many of the children. The end result: Voldemort’s Volcano of Foam and very special Dry Ice Balloons.  We think it’s such a cool way to celebrate a child’s birthday but bringing Science down to their levels through these fun experiments.

At the end of the Mad Science party, everyone took home their own tub of glow-in-the-dark slime which Mad Scientist had made using Troll’s blood! Kids were tickled by this as it sounds icky but fun!  We received compliments from parents that they were impressed with the Mad Science party.  They found it refreshing and educational.

Do note that this particular ‘Young Wizards’ party programme was originally designed for older kids (7 & above) but since majority of our guests are advanced in their Science knowledge, Mad Science made an exception for us. As the hosts, we were pleased to see the kids spell-bound from start to end. Kudos to the Mad Scientist and her team!

What the Birthday Girl like about the Mad Science Young Wizards Party:

1. We had so much fun – we learnt how to make a rainbow potion and a foamy volcano
2. It’s different from other birthday parties that I’ve been
3. It’s exciting – we saw fireworks and played with dry ice bubbles on our head and hands
4. All my friends get to have fun learning about Science
5. My friends were still talking about my Mad Science party in school the next day!

Mad Science is on a mission to spark the imagination and curiosity of children by providing them with fun, interactive and educational programs that instill a clear understanding of what science is really about and how it affects their world. It runs a variety of age-appropriate themes for Birthday Parties.

You can read about some of the Mad Science Parties here: 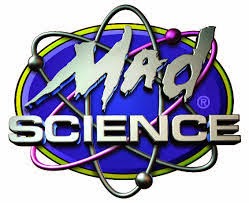 Disclaimer:  Mad Science Singapore sponsored the ‘Young Wizards’ party programme for the purposes of this review. All opinions and photos are, as usual, ours.