West Side Story is one of those hallmark musicals where timeless tunes such as ‘Tonight’, ‘Maria’, ‘America’ and the highly popular, ‘I Feel Pretty’ originated. It’s now back on Singapore shores from 13th to 30 September 2017. 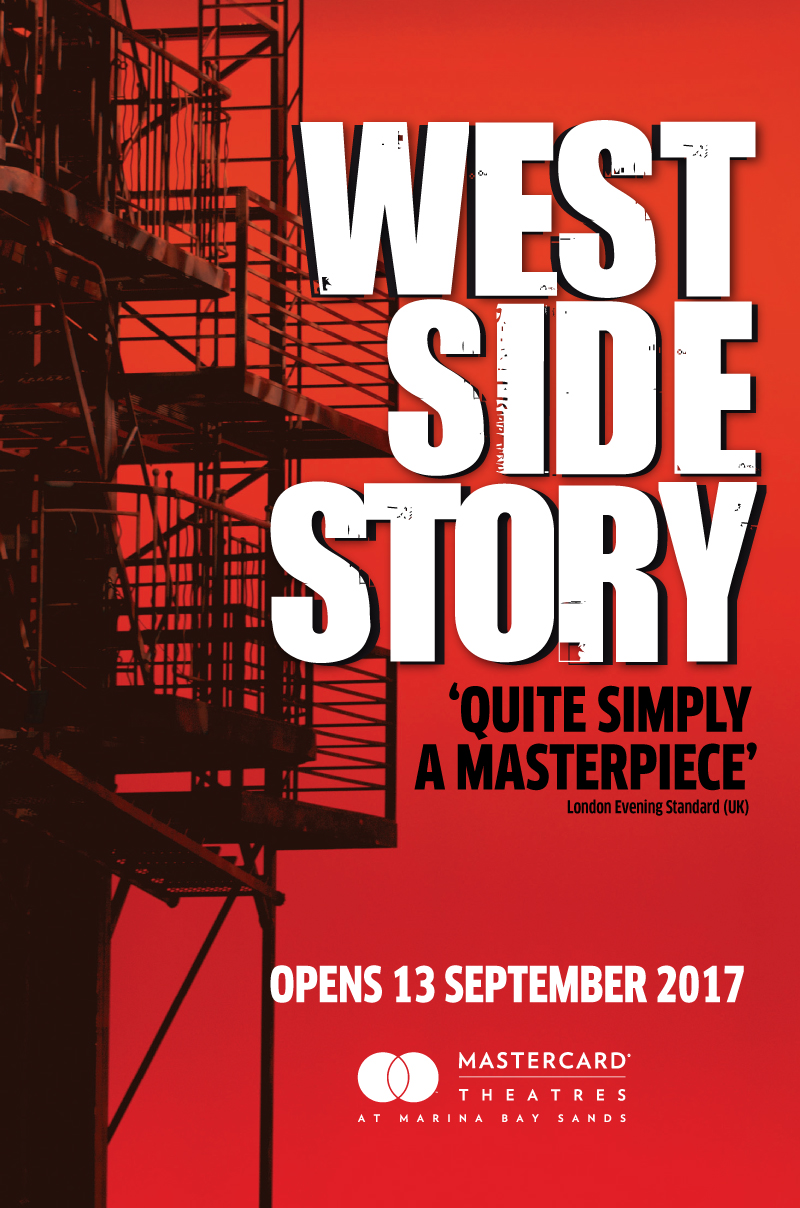 The Music and Songs: With music and lyrics composed by legendary composer, Leonard Bernstein and Stephen Soundheim, it is a real treat to be able to see and hear these iconic tunes performed LIVE (yes, there’s an actual orchestra in the pit!) and conducted by renowned conductor Donald Chan, himself a student of Bernstein.

The cast did a very commendable job with the songs. In particular, Marc Koeck (Tony), Natalie Ballenger (Maria) and Keely Beirne (Anita). These are difficult songs to sing especially when accompanied by high-energy dance moves and highly-strung emotional scenes. Koeck in particular won the hearts with his rendition of ‘Maria’, sung with perfect poise and control. 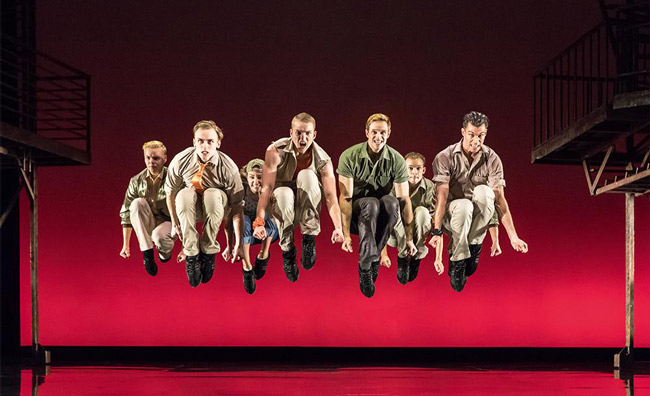 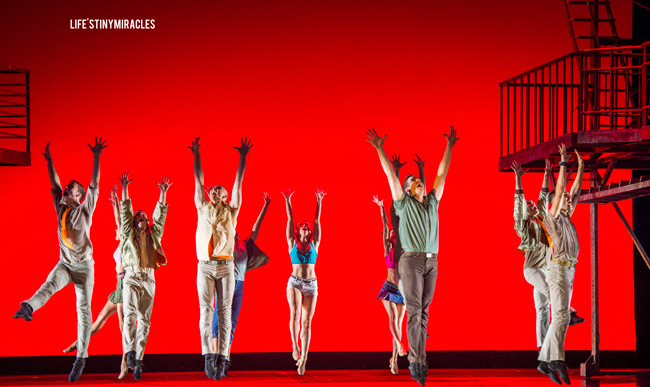 Ballenger carried the role of ‘Maria’ well. With her petite frame and doe-eyed features, she had no trouble portraying an innocent naïve immigrant finding love in the Big Apple. Her chemistry with Koeck was palpable. While her singing prowess is evident, we felt that she was at times too ‘operatic’ in her song delivery. As such, audiences who are unfamiliar with the musical may have to strain their ears to catch the lyrics in order to follow the plot. This also did not lend fully to her lower middle-class Puerto-Rican (PR) immigrant persona.

The Dance Choreography: This production features original choreography of legendary Jerome Robbins, American choreographer and co-director of the critically acclaimed film adaptation of this musical. From modern Jazz to Latin rock, the dances were riveting to watch. The cast executed piece after piece of energetic dances with short, sharp, superb syncopation accompanied by Chan’s symphonic ensemble. 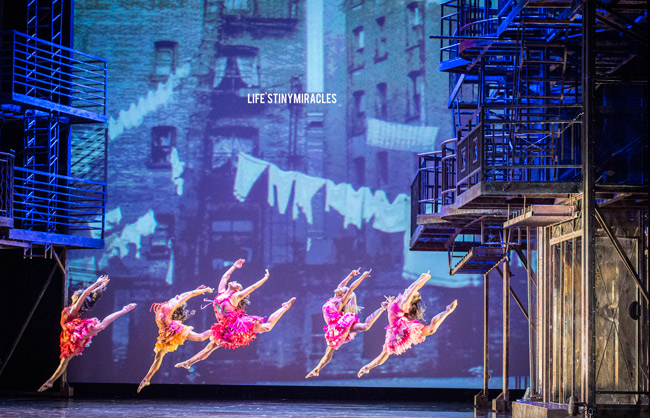 The Cast: This is an all-American cast with seasoned Broadway performers. We were particularly impressed with Keely Beirne who plays Anita.

So…is it suitable for kids?

West Side Story replicates the main themes explored in Shakespeare’s ‘Romeo & Juliet’, set in modern context in the West Side (Read: rougher part) of New York so you can expect some mature themes like self-identity, social integration, racial discrimination, young passionate love plus actions like kissing, pre-marital sex, death, rape and suicide which may render it unsuitable for pre-teen kids.

We brought our 9 year-old along as she is familiar with the story of ‘Romeo and Juliet’ and I wanted her to have the opportunity to hear the musical’s iconic tunes LIVE. She enjoyed the songs and dances but had trouble understanding the plot despite us giving her a pre-performance summary. On hindsight, this musical may be more suitable for teenagers and up so it might be the perfect excuse to leave your kids at home, and make it just an adults’ night out with your partner/spouse and friends. 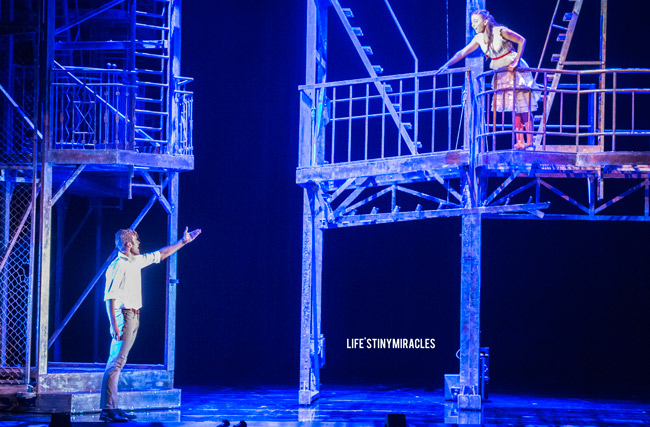 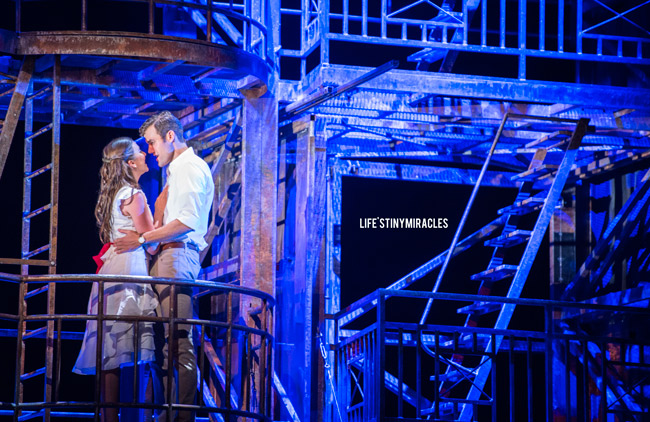 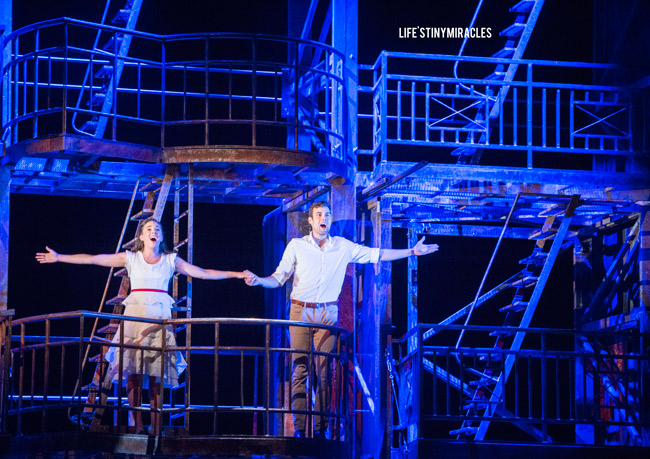 A boy. A girl. Two rival gangs. One fatal love affair.  Described as ‘The No.1 Greatest Musical of all Time’ by The Times, UK, WEST SIDE STORY is as relevant today as it has ever been. Inspired by Shakespeare’s tumultuous love story Romeo and Juliet, and set amidst the vicious rivalry of teenage gangs in 1950s New York, WEST SIDE STORY’s ground-breaking choreography and unforgettable score changed the face of musical theatre for ever when it burst onto the Broadway stage in 1957.

Now a vibrant new stage production of the classic dance musical is coming to Singapore, following wild acclaim and sold-out seasons around the world, from London, Tokyo and Sydney. An outstanding US cast will electrify audiences with their passionate high-energy dance routines and their astounding vocal range in such classic songs as Maria, Tonight, Somewhere, America and I Feel Pretty. West Side Story packs a powerful punch, both dramatically and musically. Advisory (Some Mature Content)

Thanks to our sponsor, 2 loyal readers will get to win a pair of tickets (worth SGD270) to watch West Side Story on Tuesday, 26 September 2017, 8pm.

All you need to do is:

Complete the steps in this online widget:

The giveaway ends Friday 22 September 2017, 11.59pm and is open to readers in Singapore. The winner will be contacted using the email address provided when entering this draw and will have 24 hours to respond, failing which a new winner will be drawn.  Please ensure you are able to attend the musical before you participate in the giveaway as no requests for change in show date/time will be entertained.