As I sat in the Grand Theatre of Marina Bay Sands watching the 24 world-class ice-skaters from The Imperial Ice Stars (comprising of Olympic stars, National and European champions)  executing their sophisticated ice-skating stunts to retell the classic fable of Sleeping Beauty, a few adjectives kept coming to mind.

Mesmerizing: The gracefulness and precise maneuvers of the cast had us transfixed throughout this 2-hour long production. Dressed in resplendent costumes which accentuate their movements, the skaters danced in front of the stunning backdrops which transported us from the grand interior of King Florestan’s (the XXIV) Palace to the lair of Carabosse (the evil fairy) deep in the dark woods. For the record, we’ve seen the stage transformed for many other performances but to see it become an ice rink is quite a spectacle!

Breathtaking: To say the performance is breathtaking is an understatement. The skaters pushed the boundaries of contemporary ice dance with their skill and athleticism, combining audacious high-speed leaps, throws and lifts with beautiful fluid ice dancing, all within the confines of the stage in an intimate venue like The Grand Theatre@MBS no less.  The pyrotechnics special effects and aerial acrobatics were pleasant surprises which worked to enthrall the audience further.  What’s even more awe-inspiring is that these stunts were done in perfect synchronization to Tchaikovsky’s music which brought to life the swell of crescendos and the melancholy of the plot.

Moving: Never mind if you can’t pronounce his name but any music composed by the legendary 19th century Russian composer Tchaikovsky (pronounced ‘chai-kov-ski’) is sure to be moving and exciting. Known as one of the music ‘giants’ of the Romantic era, Tchaikovsky is at his best scoring for Sleeping Beauty. While we’re familiar with the music, to see it brought to life in the retelling of Sleeping Beauty just moved the theatrical experience up by a few notches. Though not performed live, the sweeping crescendos, thick harmonies and excitable syncopation together with Tchaikovsky’s superb orchestration makes this a flawless production.

Sleeping Beauty on Ice is ice-skating at its best. Which is why this award-winning cast from The Imperial Ice Stars has, over the last 10 years, built up a worldwide following and established unrivalled reputation for their sensitive portrayal of classic works. Their other adaptations of iconic ballet classics (such as Swan Lake), have been greeted with nightly standing ovations and in our opinion, this production here of Sleeping Beauty on Ice deserves no less.  The finale wedding celebrations which rambunctiously transitioned into an encore was a delightful indulgence for the audience as we witnessed once again the finest moves from each ice-skater.  A truly mesmerizing theatrical treat for all and especially not to be missed if you have little ones who are ice-skating or ballet fans!

It would be good to read up on the synopsis of the story to enhance your enjoyment of this modern take on the traditional fairytale (which is a close adaptation of the classic ballet version): 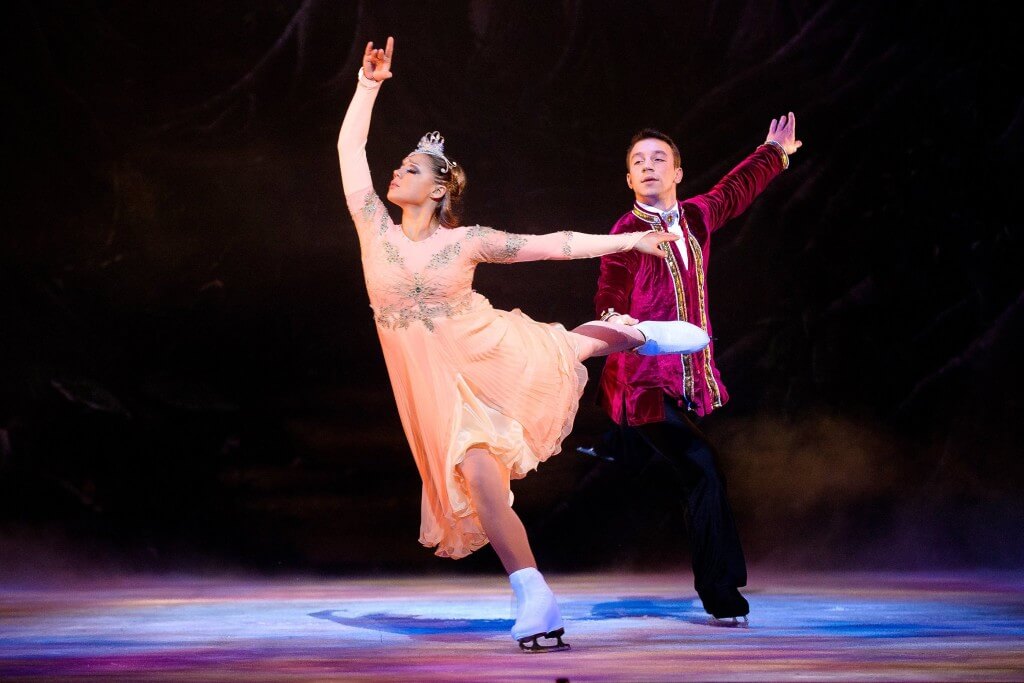 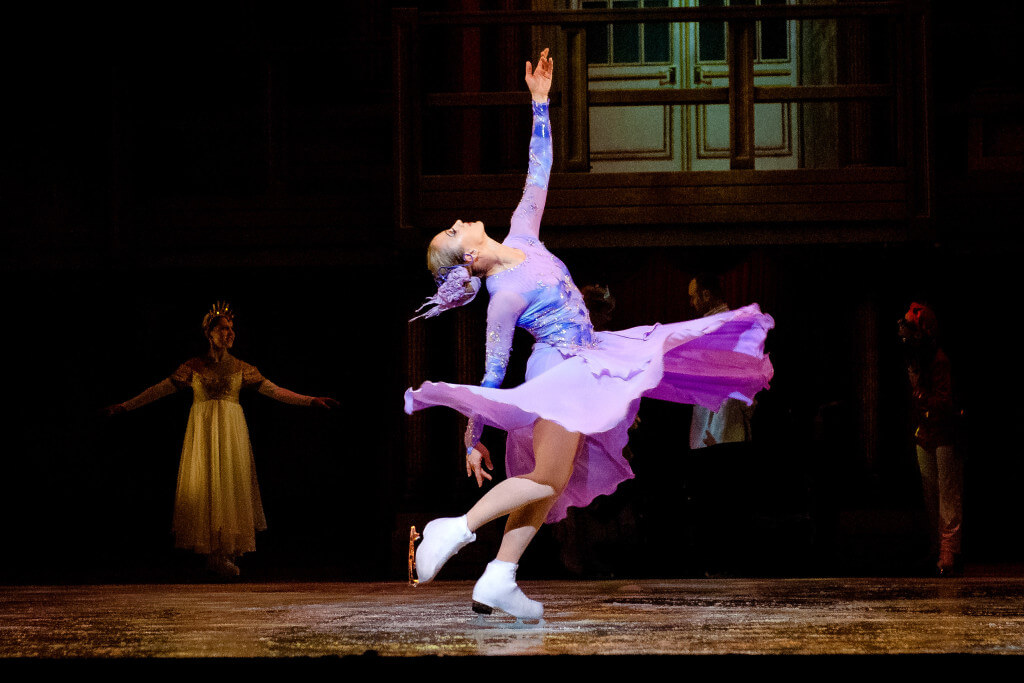 Prologue (The Christening)
King Florestan the XXIVth and his Queen have welcomed their first child, Princess Aurora, and declare a grand christening ceremony to honor her. Six fairies are invited to the ceremony to bestow gifts on the child. The most powerful fairy, the Lilac Fairy, arrives with her entourage, but before she can bestow her gift, the palace grows dark. With a clap of thunder, the evil fairy Carabosse arrives (here played by a male dancer) with his minions. Carabosse furiously asks the King and Queen why he had not received an invitation to the christening. The blame falls to Catallabutte, the Master of Ceremonies who was in charge of the guest list. Carabosse places a curse upon the baby princess as revenge: Aurora on her sixteenth birthday will die. The King and Queen are horrified and beg Carabosse for mercy, but he shows none. However, the Lilac Fairy intervenes. Though she does not have enough power to completely undo the curse, she alters it, allowing the curse to cause a peaceful 100-year sleep for the Princess, rather than death. At the end of those 100 years, she will be woken by the kiss of a handsome Prince. Relieved that Aurora’s life will ultimately be spared, the court is set at ease. 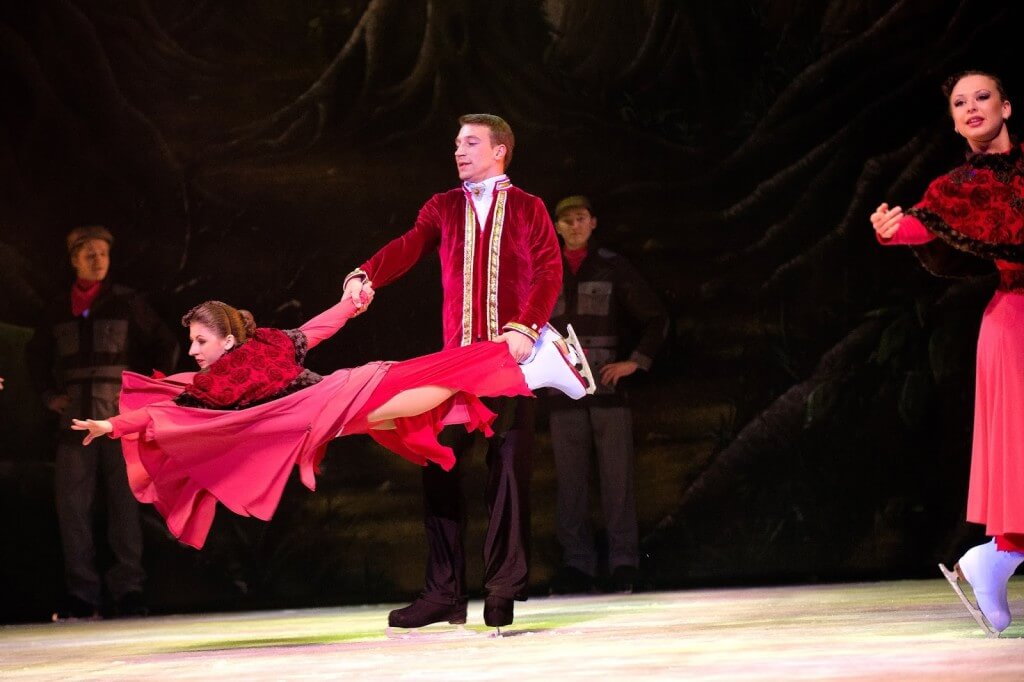 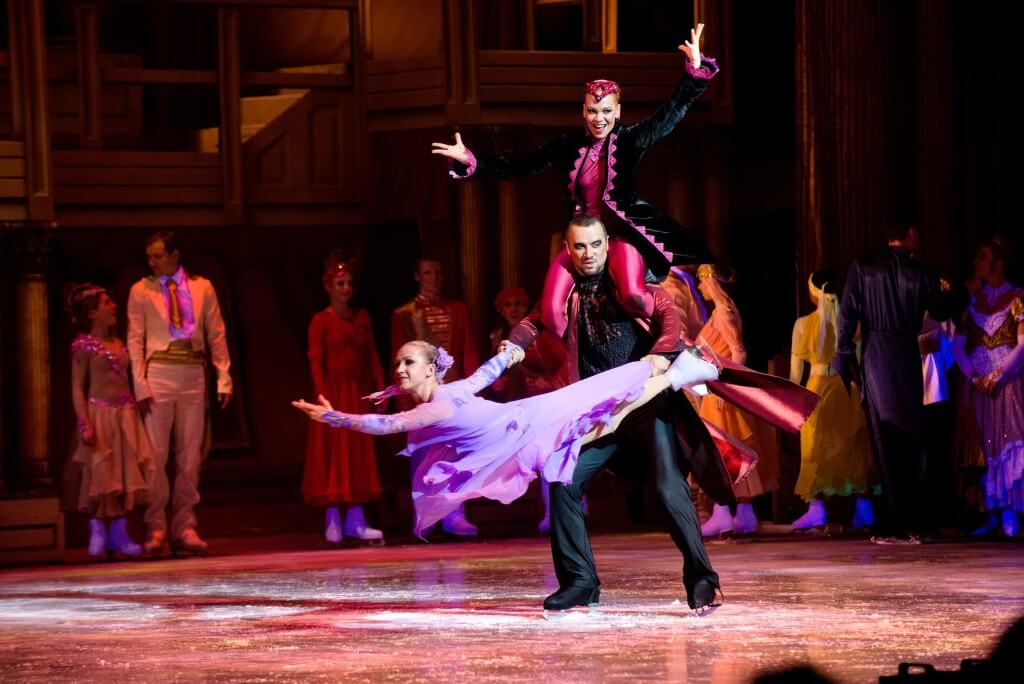 Act I (The Spell)
It is the day of Princess Aurora’s sixteenth birthday. Celebrations are underway, though the King is still unsettled by Carabosse’s omen. The townsfolk perform an elaborate waltz with flower garlands, and Princess Aurora arrives afterwards. Carabosse appears and offers the Princess a toast. Curious she takes the spiked drink, falls into a swoon and collapses. The cloaked stranger reveals herself to be Carabosse. The Lilac Fairy reminds the King and Queen that Aurora is merely asleep. The Princess is carried off to bed, and the Lilac Fairy casts a spell of slumber over the entire kingdom, which will only be broken when Aurora awakens. She then uses her magic to cover the castle in layers of vines. 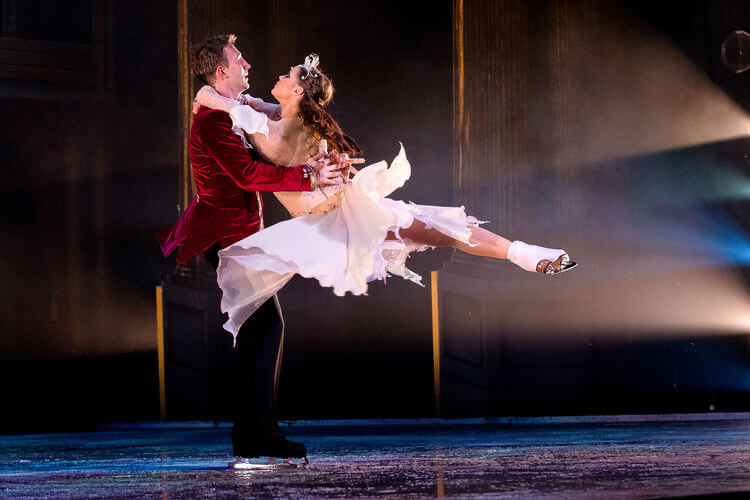 Act II (The Vision)
One hundred years later, Prince Désiré is at a hunting party with his companions. He is in a mopey mood. His friends try to cheer him up with a games and dances. Still unhappy, he asks to be alone and the hunting party departs. Alone in the forest, he is met by the Lilac Fairy, who has chosen him to awaken Aurora. She shows him a vision of the beautiful princess, and the prince is immediately smitten. The Lilac Fairy explains the situation, and Désiré begs to be taken to the princess. The Lilac Fairy takes him by boat to the castle and guides through the deep forest until at last, they reach the hidden castle. Once inside the castle, Désiré engages in a swash-bukiling duel with Carabosse and his minions which Desire eventually wins. He takes the antedote from Carabosse and awakens Aurora. The rest of the court wakes as well, and the King and Queen heartily approve when the prince proposes marriage and the Princess accepts. 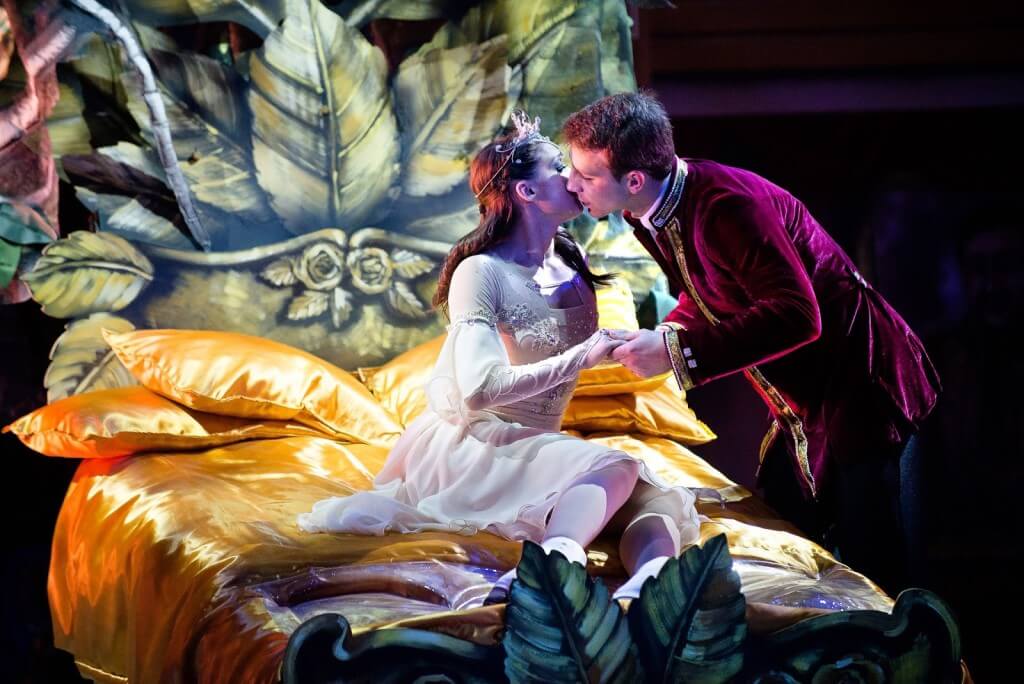 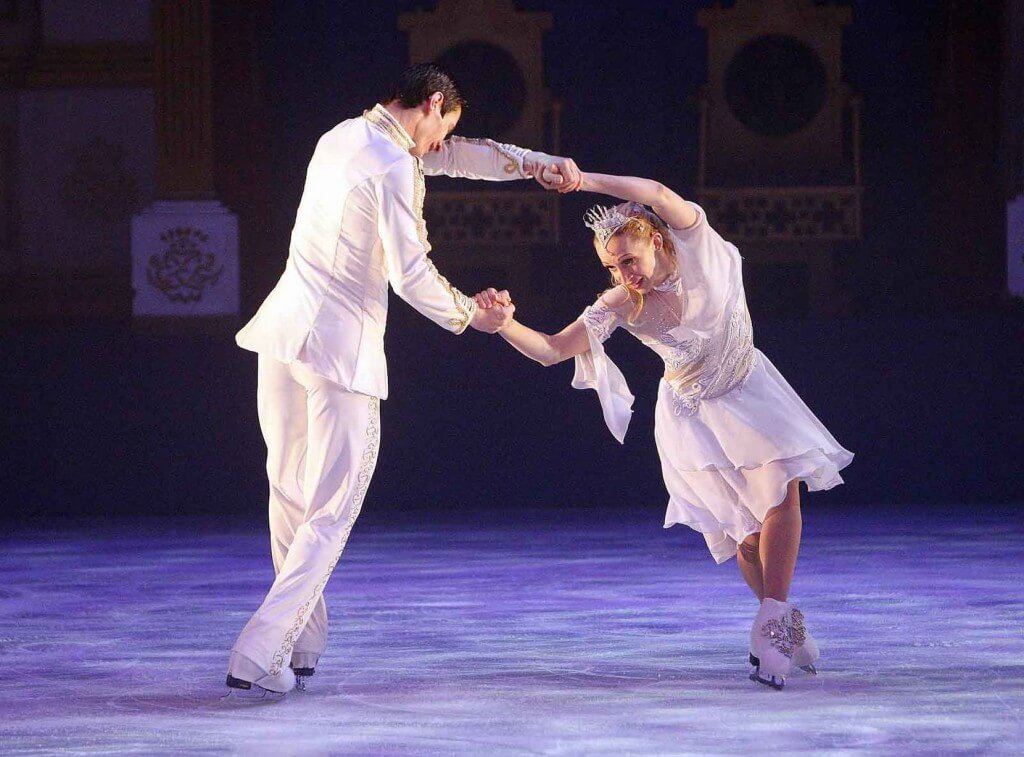 Act III (The Wedding)
The royal wedding is underway. The Prince and Princess are married, with the Lilac Fairy blessing the union.

Suitable for: Ages 3 years and above

A big congratulations to Ms. Deborah Gifford. You’ve won a Family Pack of 4 Tickets (Worth SGD380) to watch Sleeping Beauty On Ice this Saturday 26 Sept 1.30pm show, by courtesy of Base Entertainment Asia. Please check your email for ticket collection details. Enjoy the show!

Disclaimer: We were invited to the performance for the purposes of this review.  No monetary compensations were received. All opinions are ours and photos credited to The Imperial Ice Stars.