Couple of years ago, I played Paintball for the first time as part of a corporate team bonding retreat. While it was fun and unique, the outdoor experience where we had to run around to dodge paint balls high and low fired by fellow colleagues was quite rigorous for a regular bloke like me…I felt ‘spent’ at the end of it. So when I heard that I would be accompanying my 8 y/o daughter for the Laser Tag experience at Tag Team, my first reaction was, ‘will it be like Paintball? ‘ 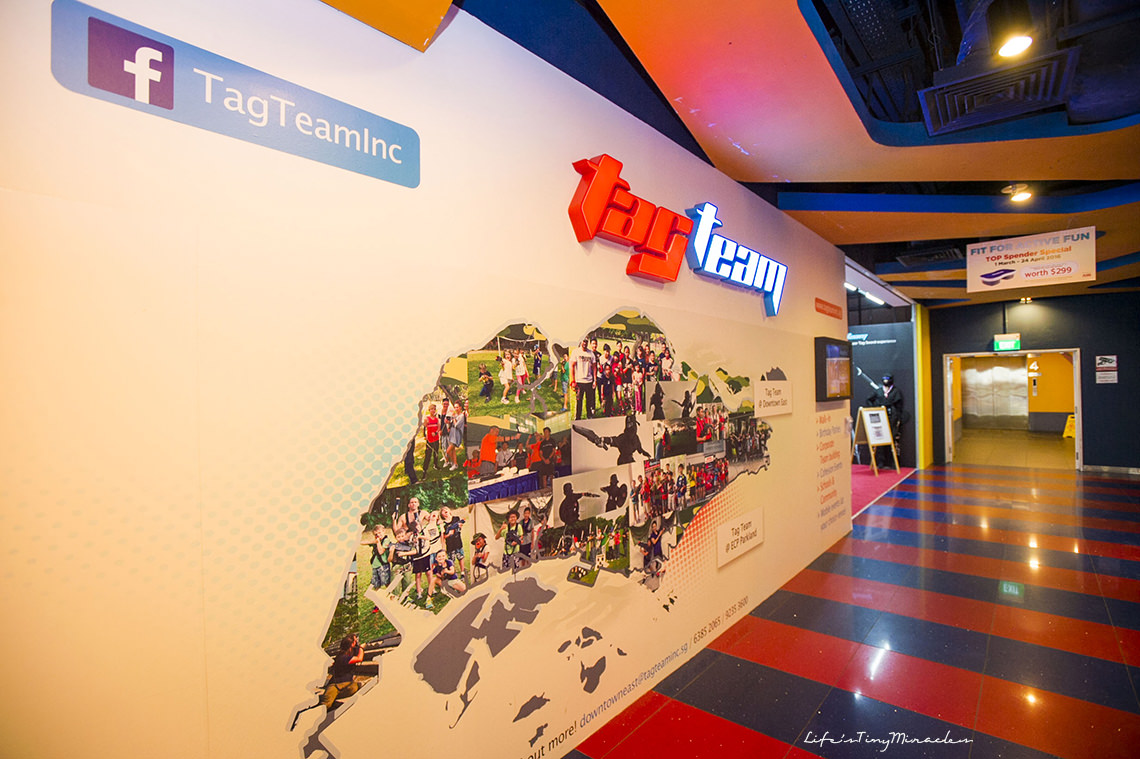 Well answer to that is No, No and No. In fact, I find laser tag much, much more enjoyable and more family-friendly.

Tag Team uses the concept of Laser Tag to ‘shoot’ your opponents. The laser is not visible to the naked eye and it does not ‘harm’ any part of your body (unlike when you’re ‘hit’ by the Paintball). A sensor on a sash that you wear will vibrate and record the number of times you’re ‘hit’ thus making it very safe, even for young kids. Moreover, laser tag is played in an indoor environment. At Tag Team’s newest outlet at Downtown East, both arenas are fully air-conditioned.

I was intrigued to find out more so I gamely ‘tagged’ along (Pun intended!) with my daughter and her friend Val. 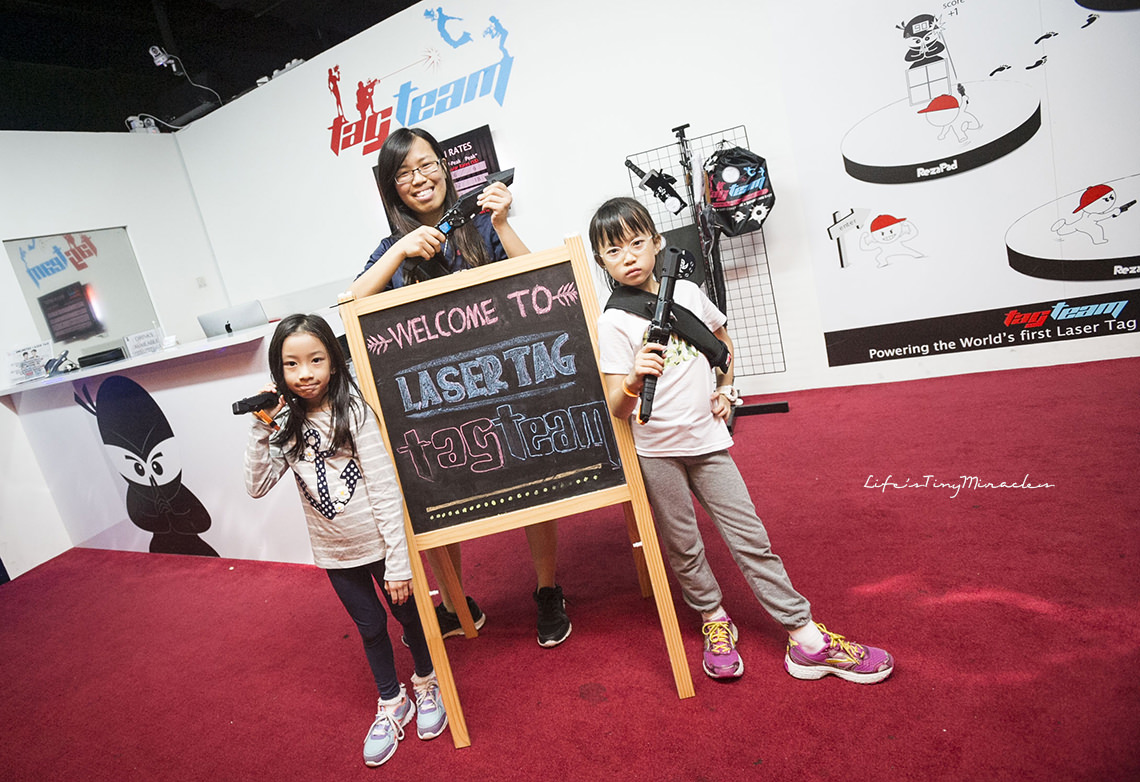 Before the game started, we were briefed on the rules and regulations. I was impressed that the staff explicitly emphasized on safety (i.e. no running, no pushing) and they also educated the players to play fair.

Next, we were given our ‘Laser Gun’ which incidentally can be switched over to be used as a Laser Sword too! We were each given a sash to wear. On the sash is a sensor (which is effectively a sensor to keep track of the number of times you are ‘hit’ by your opponents). The sash is very light and in fact, I hardly noticed it. Our gun was not like a regular gun but more space-age, fantasy kind of weapon that is lightweight and does not shoot anything except light beams meant for the targets. 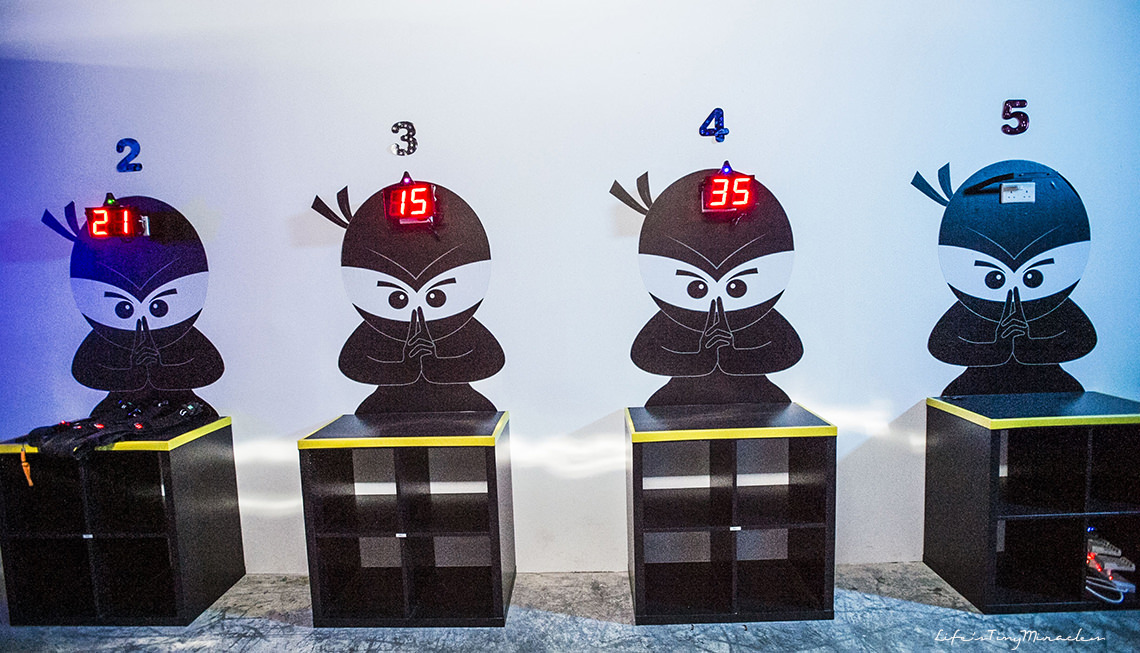 After the safety briefing, we were led to one of the arenas for practice. We were trained to shoot at the sensor on the wall and points would be accumulated. Next, our gun is transformed into a laser sword and we were then practicing ‘slashing’ the target – the same sensor on the wall. At this first stage, we were practicing on static targets and getting acquainted with how the laser guns/swords work.

Next, we were ushered into a new arena where, this time, we face other players and were told to practice ‘shooting’ and ‘slashing’ each other. Sounds violent but it’s actually quite harmless fun. There were more laughter and giggles than screams! 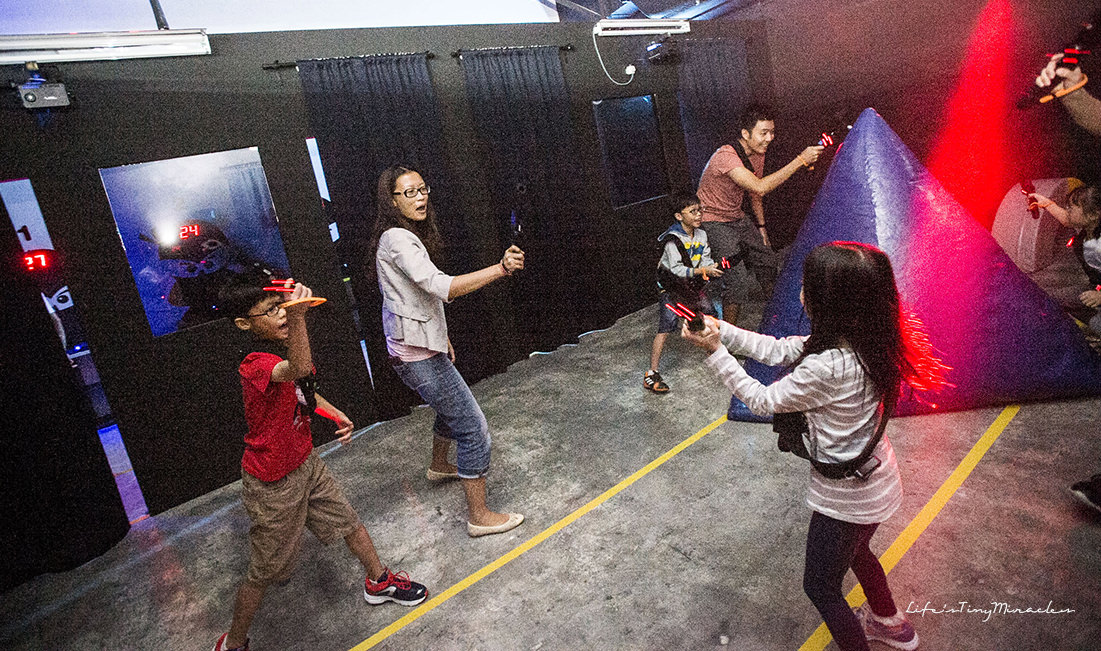 Finally, we were led into the larger arena – a space somewhat slightly larger than two school classrooms with random large foam walls placed in between. Here is where things get more ‘serious’. We were split into two teams – Parents vs Children. The mission is to shoot your opponents and accumulate as many points as possible. Before we started, the friendly staff reminded everyone again of the safety rules: No running, no pushing and to play fair.

So, off we went! The 15 mins seem to last forever as we had to dodge the frisky and far more nimble kids who could just weave in and out of nooks and corners with ease. Finally when I got my ‘mojo’, I was having a whale of a time just ambushing the kids alongside the other parents. It was seriously fun! When the mission ended, we all wanted to play more! Unknown to us, we worked out quite a bit of sweat while having fun!  There was also no rigorous bending up and down so it is certainly friendlier for families (yes even for non-sporty parents). Do note that it is rather dark in the arenas so some younger kids may take some time to ‘acclimatize’. 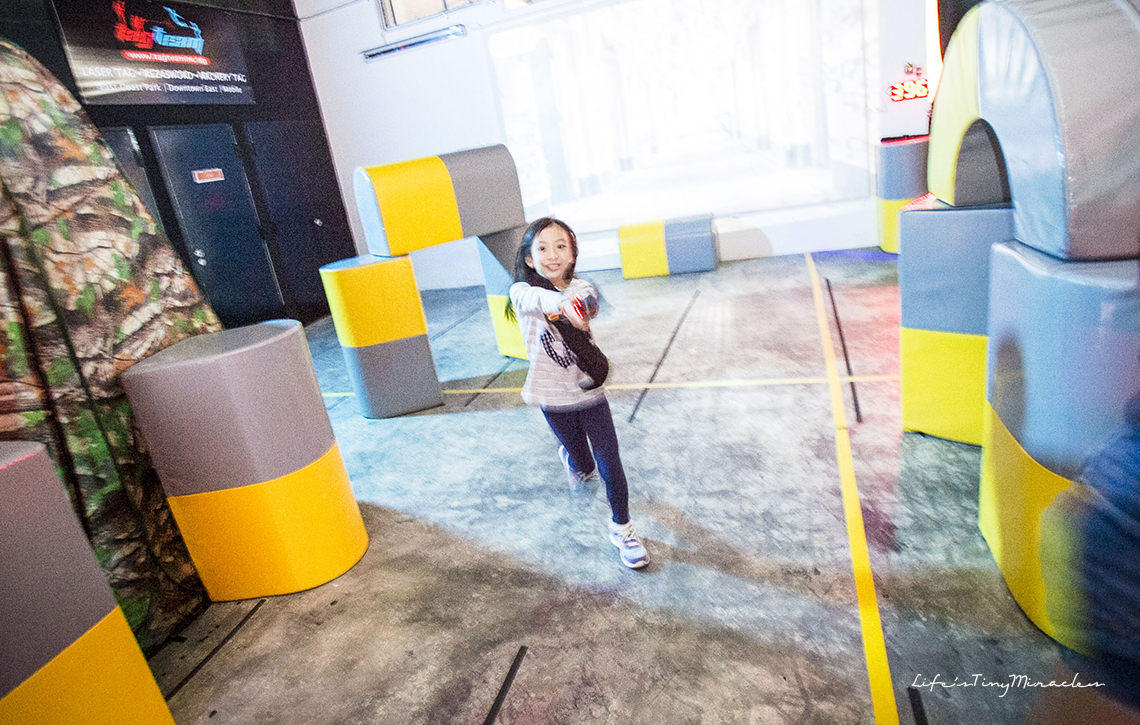 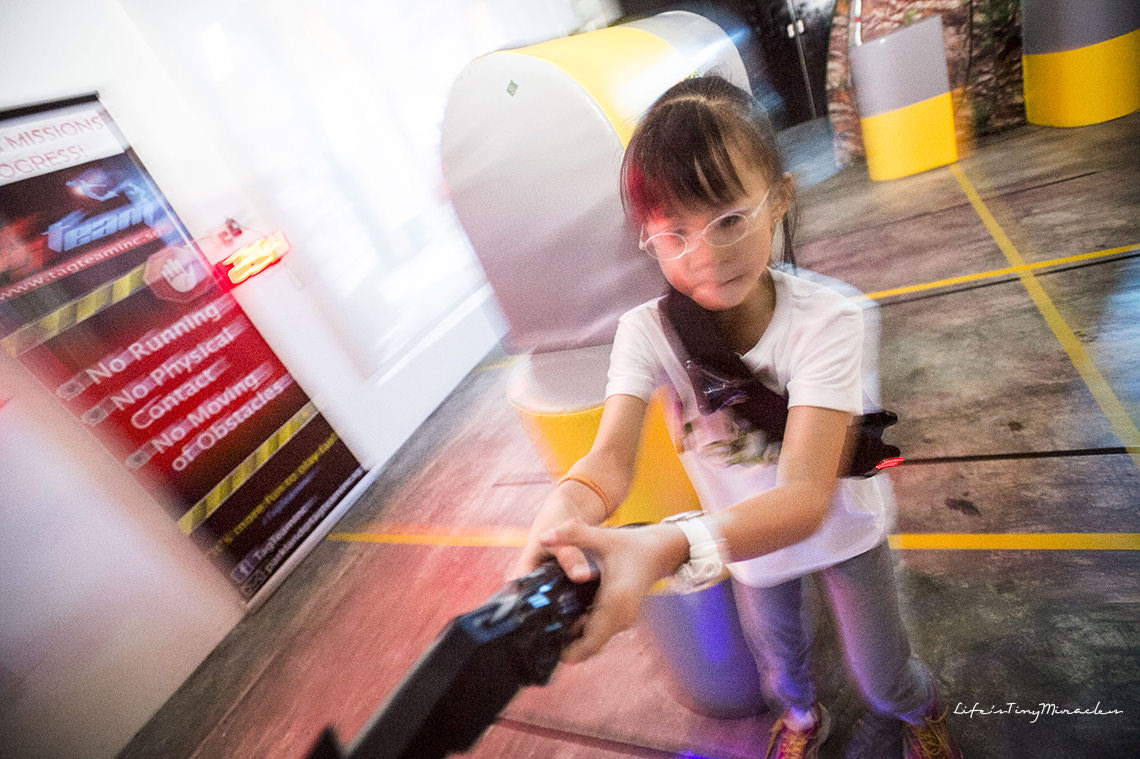 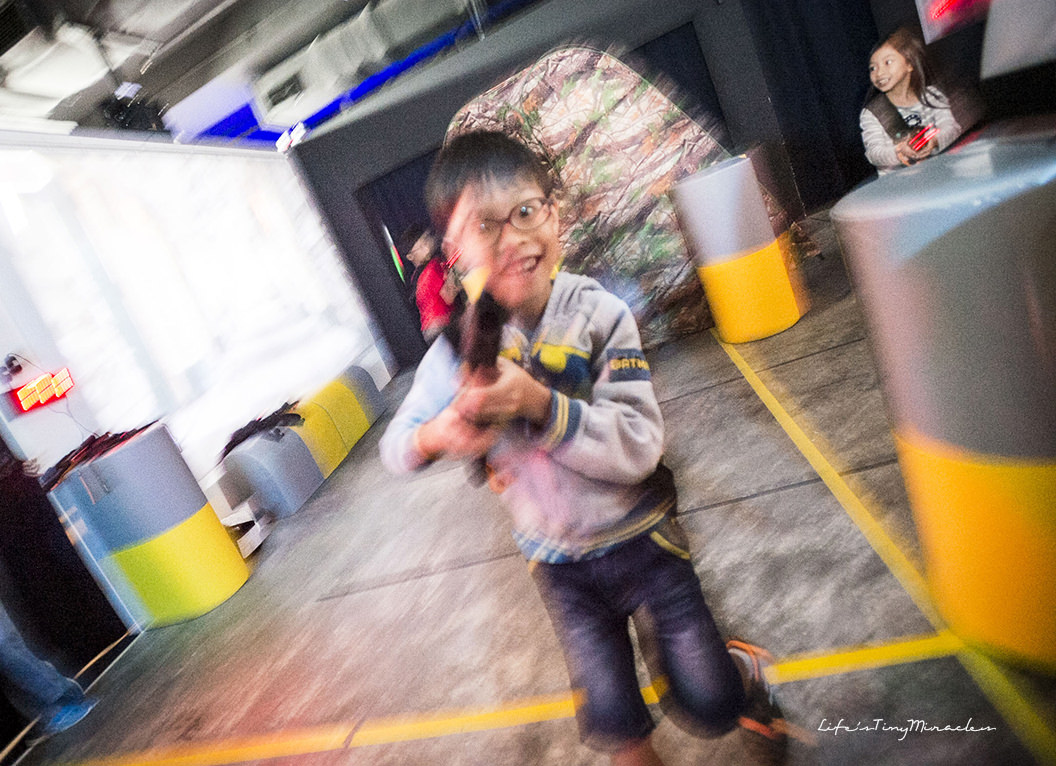 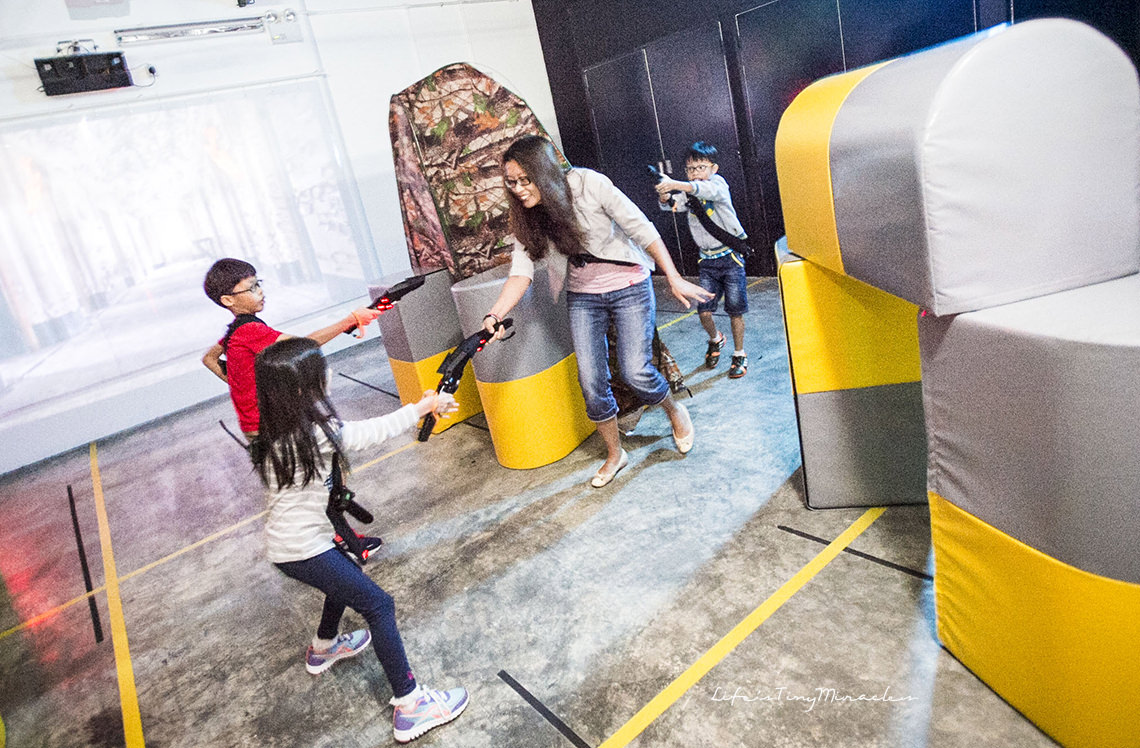 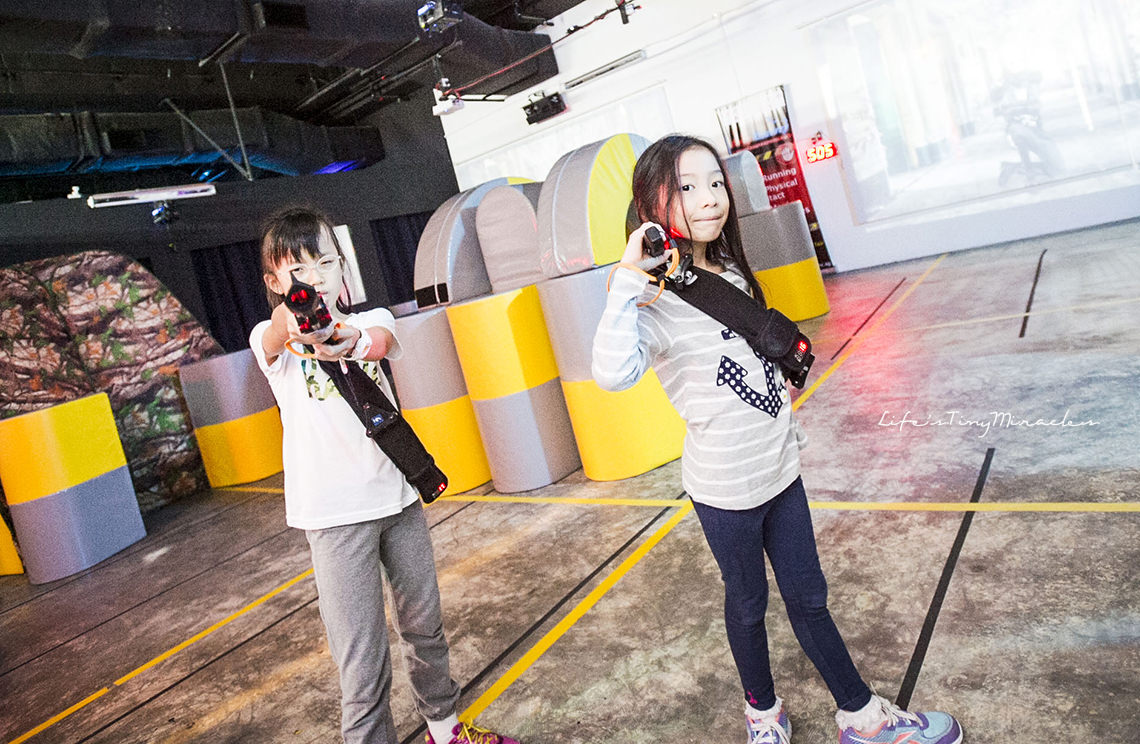 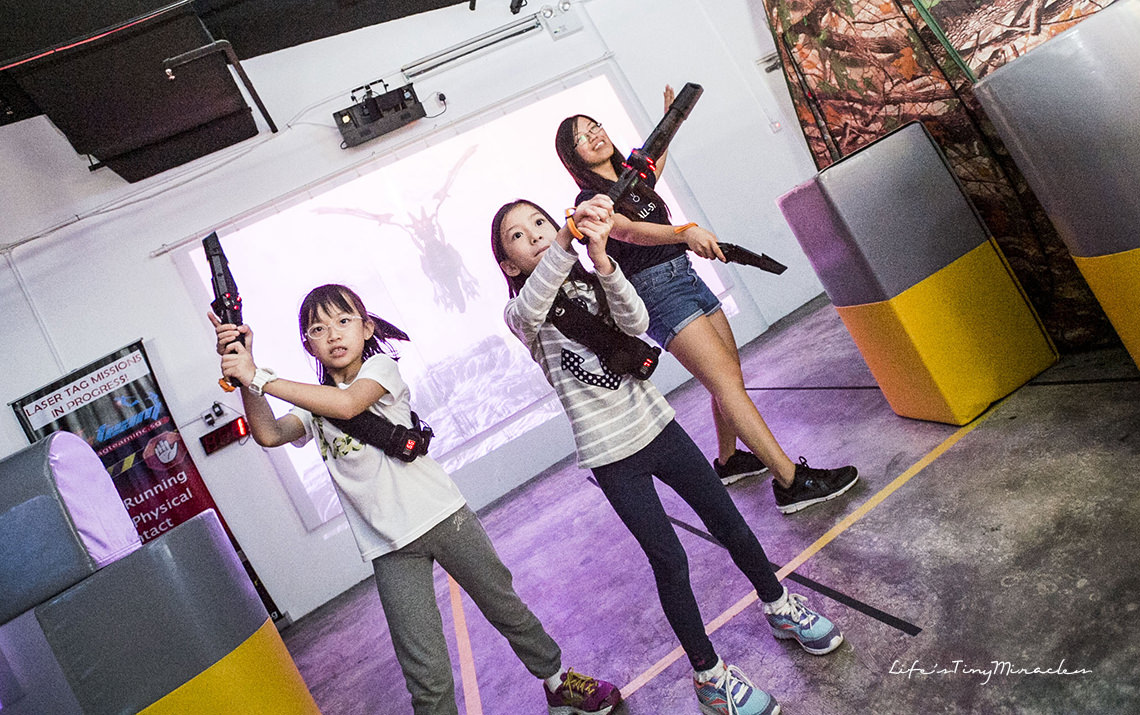 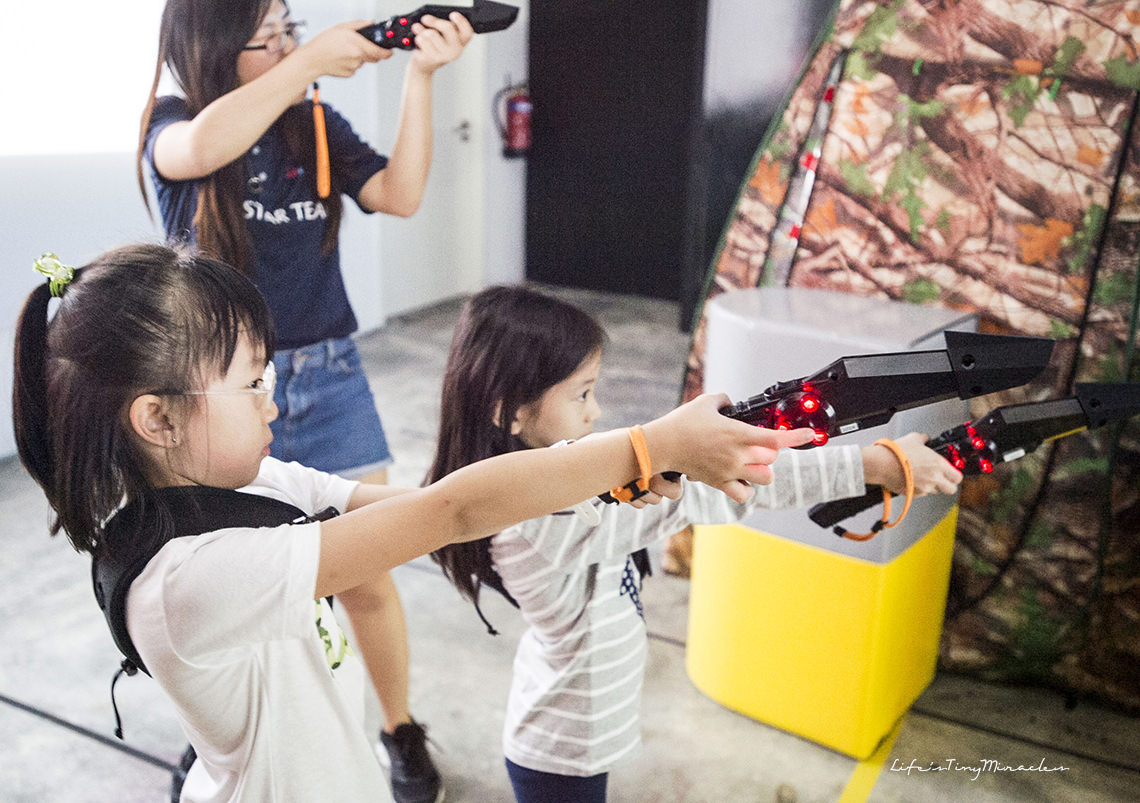 I must commend the staff at Tag Team, Downtown East for being extremely friendly and helpful. They were very hospitable and even stepped in as reinforcements to help us (i.e. the adults) during the Missions. Tag Team @ Downtown East has a small private room(with a capacity for 40 pax) suitable for birthday parties or as a room for corporate teams to unwind and reflect. Yes, there are corporate and community organizations who hire the venue for team bonding events as well. Check out Tag Team’s website for more information if you wish to make such bookings. 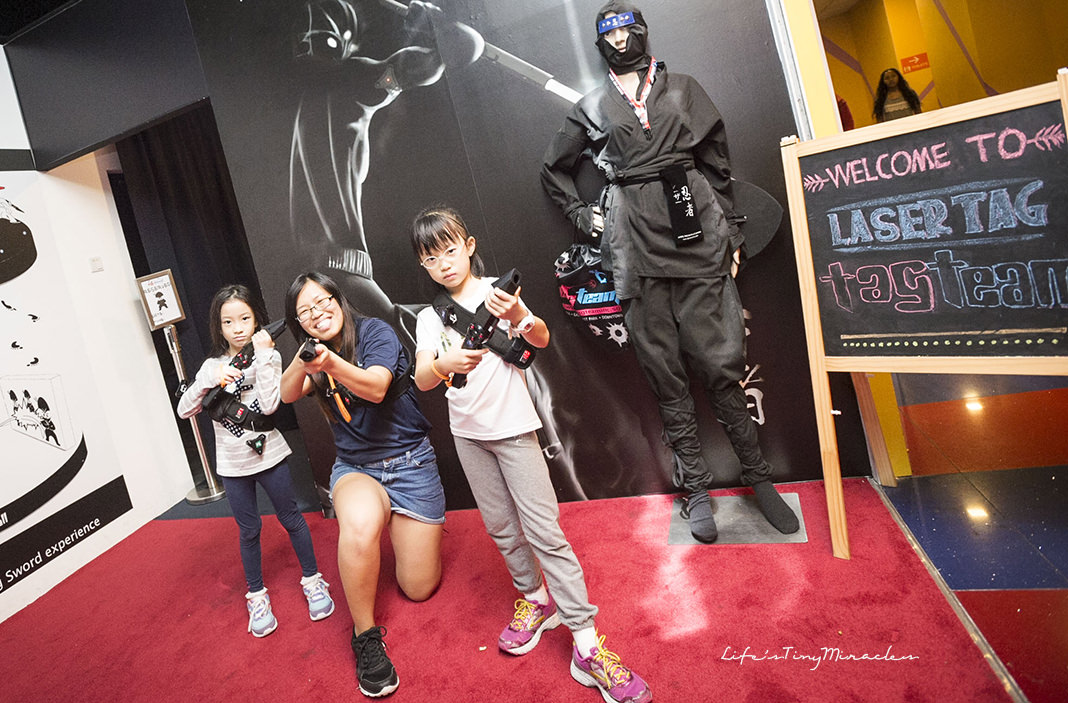 Here are some FAQs for those who are new to Laser Tag / Tag Team:

1. Is Laser Tag safe?
Any sports activity carries risk but here at Tag Team, a safety briefing is conducted and safety rules are emphasized frequently. Staff are there to supervise and are never far. The laser beams emitted are not harmful to us.

2. How heavy are the equipment and gear?
Actually they are very light. There’s no need for a helmet and you could hardly notice the sash across your body. The ‘gun’ is lighter than most Nerf gun so not to worry.

3. What’s the minimum age to play?
Generally it’s about 4 years old but do note that if the other opponents are adults then it may not be suitable for the 4 year old to be playing alone. But if there’s a party of kids, then it’s perfect.

4. Can girls play Laser Tag?
Yes of course! This is a gender-neutral activity. Both Dana and Val were playing it for the first time and they absolutely LOVED it! Actually we think laser tag is an ideal indoor family bonding game too.

5. How long is each Laser Tag mission?
Each mission is about 15-30 minutes.

6. What are the charges? 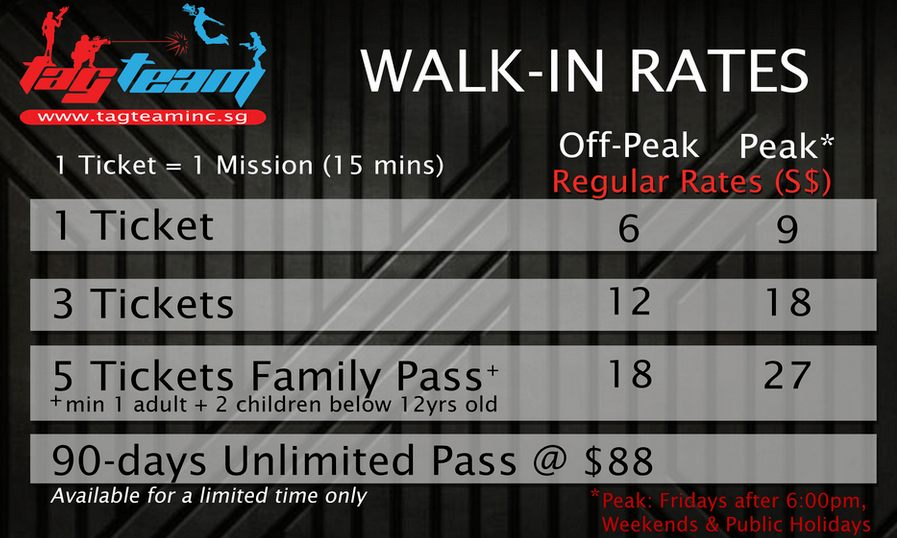 Thanks to Tag Team Inc, we are giving away two sets of 5 Tickets Family Pass to 2 loyal readers!  Each ticket entitles one person to one mission at Tag Team @ Downtown East. To participate, follow these 3 simple steps:

For bonus entries, follow the steps in the online widget here:

The giveaway ends 10 April 2016, 11.59pm and is open to readers in Singapore. The winner will be contacted using the contact particulars provided when entering this draw and will have 24 hours to respond, failing which a new winner will be drawn. All incomplete and unverified entries will be disqualified. All entries will be verified before the winner is announced. Please note that all fake Facebook and Instgram accounts (e.g. accounts set up purely to take part in contests with no authentic posts or very few real friends) will be disqualified.  All the best!