The Singapore Repertory Theatre’s The Little Company (TLC) is launching their 2015 season with an amazing line-up of five musical plays, promising a fun-filled, retelling of classics for the family to choose from. We are proud to present the season’s two first exciting upcoming productions Goldilocks and the Three Bears (in Mandarin) in March followed by The Three Billy Goats Gruff in April.
Goldilocks and the Three Bears (Mandarin) 金发姑娘和三只熊 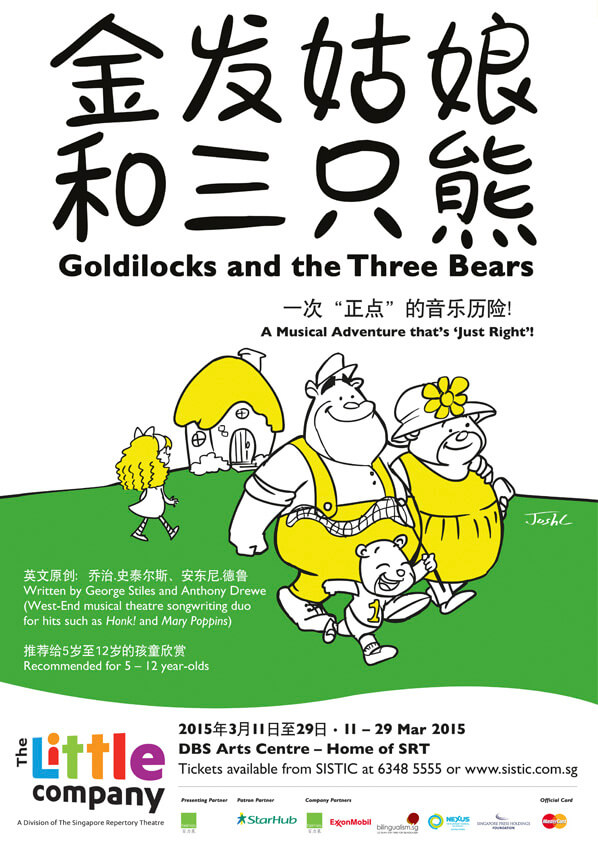 This March 2013, SRT’s The Little Company brings the well-loved fairy tale of Goldilocks and the Three Bears to the stage. Goldilocks, on a trip into the forest, ventures into a seemingly uninhabited house. In the process of making herself at home, she turns the place into a gigantic mess! Little does she know that the house belongs to a family of three bears, who are not too pleased to witness her handiwork. Goldilocks and the Three Bears reminds children not to fiddle with the belongings of others, lest there be consequences to bear.

The hugely successful Goldilocks and the Three Bears enjoyed sell-out houses with its English production in 2013. If you loved the English version, don’t miss the chance to join the cast as they bring your child on an exciting Mandarin journey through this timeless classic!

The Three Billy Goats Gruff (affectionately known as “Baby”, “Middle” and “Big”) graze happily together with their caretaker, Little Bo-Frilly. But one day, it dawns on them that they are in the middle of a horrible drought. As the grounds dries up, they are slowly but surely running out food. Together, the gang makes the decision to cross a bridge to the other side of the valley, where lush green grass awaits.  Unfortunately, below the bridge lives a frightening troll that loves to feast on goats! Can they outsmart the monstrous, greedy troll in this fight for survival?

Following the hugely successful production of Goldilocks and the Three Bears and The Three Little Pigs, SRT’s The Little Company presents the third and final instalment of its Trio-series featuring music and lyrics by the award-winning West-End musical theatre songwriting duo – George Stiles and Anthony Drewe (Honk! and Mary Poppins). Step into the fairytale world of The Three Billy Goats Gruff – a musical that is guaranteed to be snortingly silly and full of giggles. 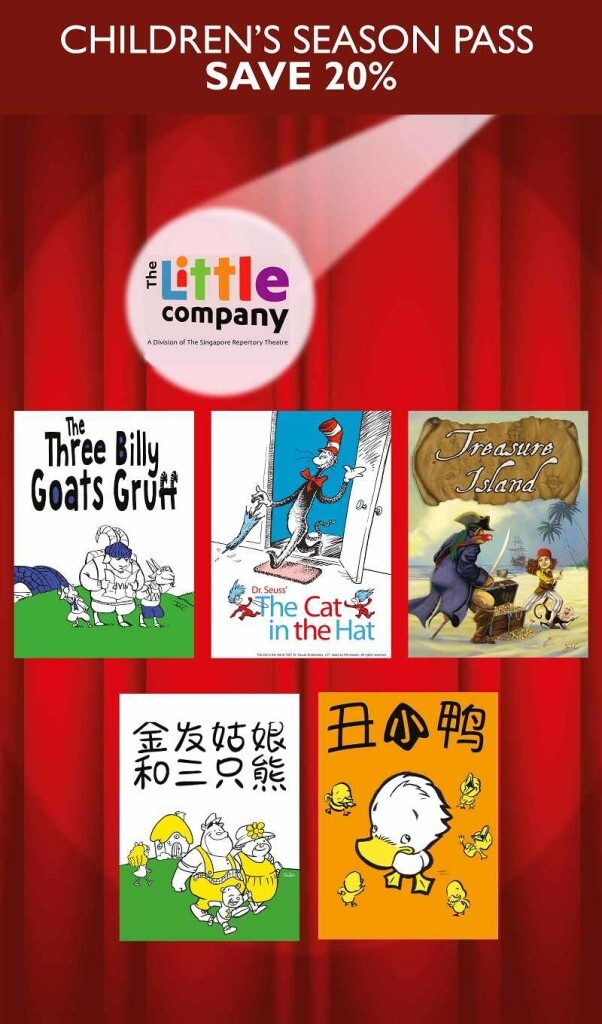 If you love SRT’s The Little Company’s productions (like we do), purchase its TLC Season Pass to ensure your children get lots of fun learning moments in the theatre this year while you enjoy a savings of 20% per production. With an amazing line up of productions, you can be assured the Pass will be put to good use and your little ones meaningfully entertained all year long!

Apart from Goldilocks and the Three Bears (Mandarin) in March and The Three Billy Goats Gruff in April, we can expect The Ugly Duckling (Mandarin) in July, The Cat in the Hat in August and a wonderful production of Treasure Island in November. Be one of the first to get the TLC Season Pass to enjoy great savings. For more information and to purchase the Pass , click here.

Thanks to our sponsor, we have these prizes for two loyal readers:

To participate, simply do the following:

This giveaway ends on 15 March 2015, 11.59pm and is open to readers in Singapore. The winner will be contacted using the contact particulars provided when entering this draw and will have 24 hours to respond, failing which a new winner will be drawn. All incomplete and unverified entries will be disqualified. All entries will be verified before the winners are announced. To be fair to our sponsors, please note that all fake Facebook accounts (e.g. accounts set up purely to take part in contests with no or very few real friends) will be disqualified.

Read our reviews of SRT’s The Little Company Productions from 2014: